Architecture and Art are not two separate fields and are actually closely related to each other. This is evident in our everyday environments around us. For example, in the delivery of public buildings, we see more and more partnerships between artists and architects, particularly in designing schools, shopping malls, and hospitals. These kinds of collaborations started from the very beginning designing process and using art as more than just a decoration.

The integration of Art and Architecture history can be traced back to the Gothic, Renaissance, and Baroque periods. Take Gothic Art for example. After the fall of the Roman Empire, people intended to move away from the city where they thought it was not safe. At the time there was an urgent need to re-centralize and strengthen the power and landholdings.  As a result, Gothic architecture was created. Abbot Suger, one of the earliest patrons of Gothic architecture, adopted the idea that light symbolized  God, and it was important to bring light into cathedrals which served as religious centers.  The creation of these Gothic style cathedrals brought people back to the city and revitalized the local economy. The rise of Gothic architecture has shown that the combination of art and innovation can impact a society’s living conditions and style.

We can never separate Art and Architecture; as we have seen throughout history, they both work together and have the ability to impact our lives in profound ways.  In today’s world,  people put emphasis on art as an essential part of our life. Art is not just decoration, it is a part of interior and architectural design. We will show you some great cases to inspire you to think about other ways to present your art.

Nordic design has been trending in many areas. We want to spotlight one of the kindergartens in the Tromso, and show how it fulfills its mission by artistic design. Tromso is located in the most northern part of Norway, which has harsh climate conditions during the winter. The long nights typically accompany snow and freezing temperatures. The Tromso kindergarten was designed to accommodate these frigid conditions in order to have a playground for the kids and maintain their art education. The kindergarten’s design uses a number of longitudinal zones to create a smooth transition from roofed outdoor terraces to the indoor playground. This design links the wide landscape to the intimate zones. By using many adjustable walls, the rooms can be flexibly changed to any shape or size depending on utilization need and creativity. They can be turned like indicators around an axis and be put in different positions to make various smaller rooms in the larger base room. Toys are integrated into the wall to make a real playground for kids. The design of the walls itself is a perfect example of an artistic design that combines both practical and aesthetic needs.

As the first art shopping mall in the world, Guangzhou K11 incorporates art is not just the decoration, but in the core concept and infrastructure of the mall. This mall-museum hybrid established its art committee before starting the architectural drawing and planning in order to give the artists a lot of autonomy for creation. One stunning artwork in Guangzhou K11 is an installation titled Upscaling created by artist Gao Weigang. When the architect and artist discussed the concept, they wanted people to be able to see this magnificent artwork from multiple different angles. The result of the discussion was this seven-story tall art piece installed beside the elevator. When people take the elevator, they can appreciate it from various perspectives. The interplay between the artistic and architectural elements of the mall does not stop there, as they also adopted the color and material from this art piece to decorate the floor and ceiling. This is only one example of how the artists and architects have worked together to turn the space into an art playground. The collaboration between architecture and art has proven to be successful for Guangzhou K11, as they welcomed half a million visitors in the first two weeks when it opened and was named the most innovative company by the FAST COMPANY in 2019. 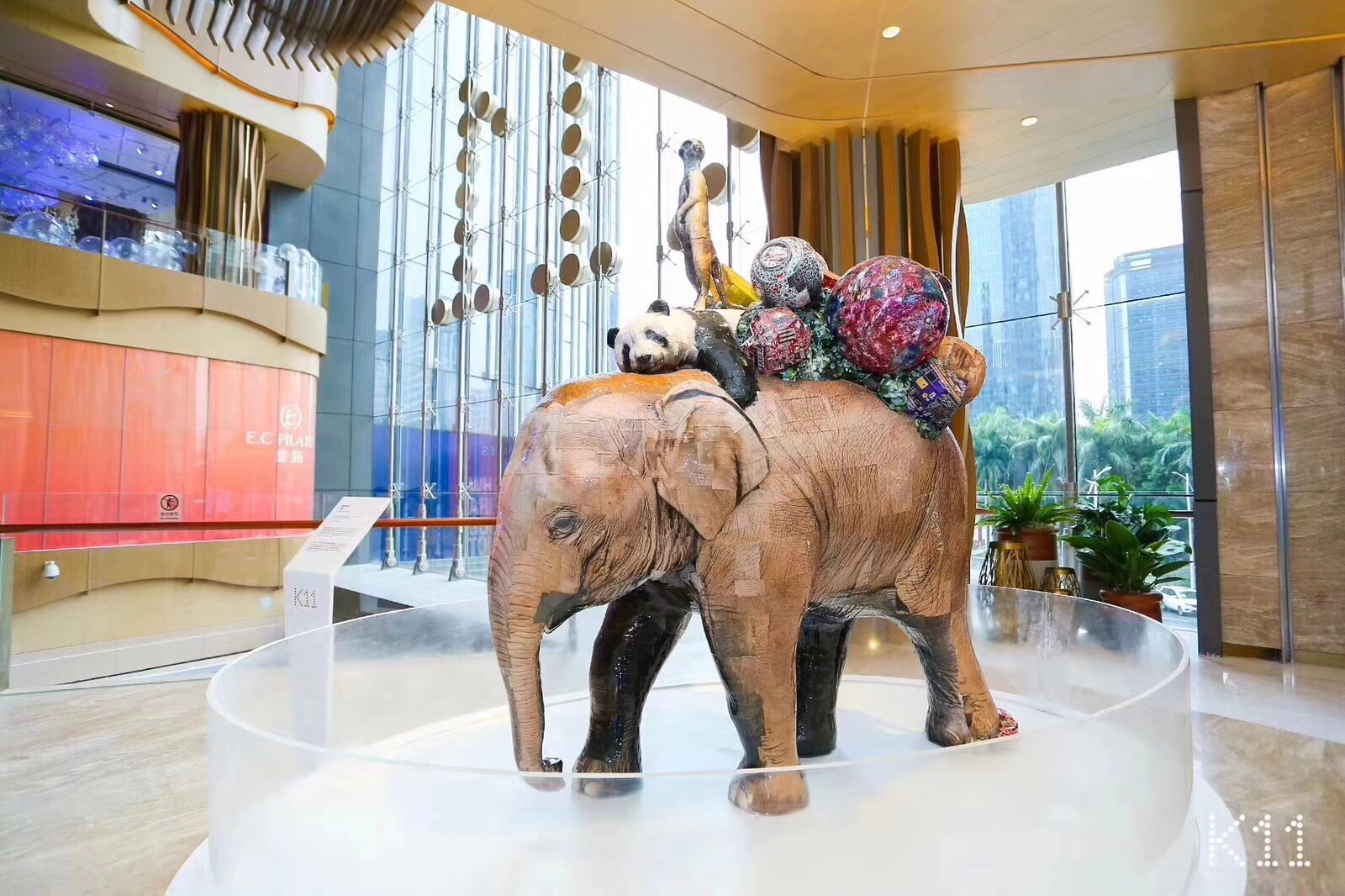 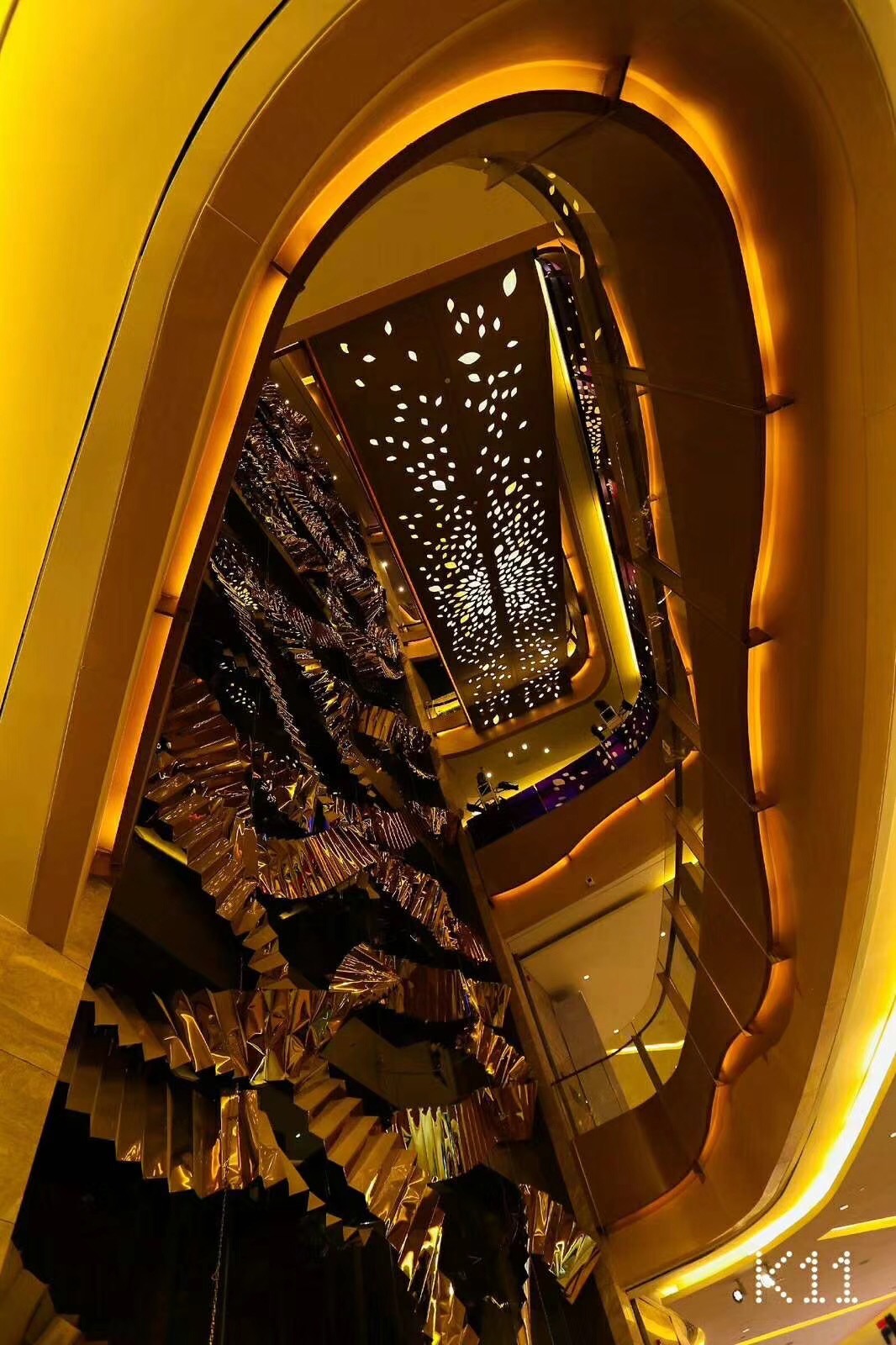